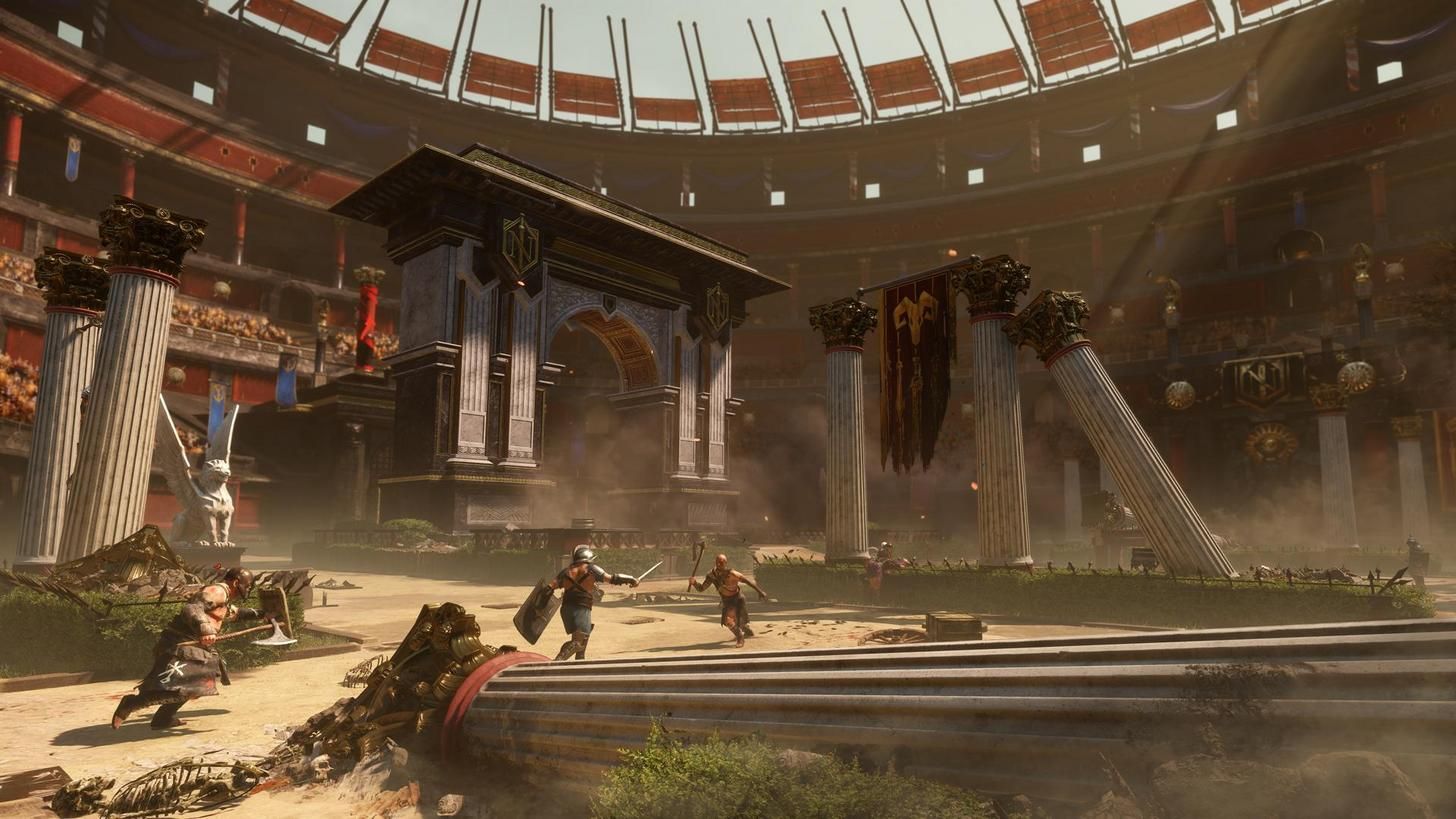 The Landsbeat—officially called The Gladiatorial Contest of Arms in Honour of the Landsmeet—is an annual event held in various cities across Ferelden and takes place at the same time as the Landsmeet. This is usually in Cloudreach, but can be as late as Justinian. Any city with an arena usually takes part in this celebration, and any gladiator worth their salt will make sure to join the competition. Whether it be for fame, coin, or the prize, many an adventurer has tried their luck fighting against other experienced opponents and lost.

While the event always lasts four days and one rule prevails in all of Ferelden, all other rules are adjusted as arenas see fit. This includes the number and type of battles, rounds, contestants, and weapons.

The only rule always adhered to is to not kill one’s opponent.

The most common types of contest are solo fights and duo fights, though on rare occasions arenas will allow triple fights if there are enough applicants.

This means that for four days, fighters either face their opponents alone, with one companion, or with two companions.

There are different rules for elimination, and contestants will be informed of which rule applies in any given contest.

There are many different types of contests. This is a list of the most commonly used rules to make each contest unique. Some arenas combine several of these rules in entertaining and surprising ways.

The Favour of the Crowd can be gained by:
– Dealing the eliminating blow to an opponent.
– Spending a major action to gesture to the crowd in a manner that plays to the crowd’s emotional involvement in the preferred outcome of the match. Contestants can make a Communication (Instigating) or Communication (Performance) test vs a TN based on the crowd’s attitude towards them. TN10 for friendly, TN14 for indifferent, and TN18 for hostile. On a successful test, the contestant earns the favour of the crowd.
– Using the following stunt against an opponent:
I am the Champion (3SP): The contestant attacks their opponent with flourish and great panache, which earns them the favour of the crowd.

Contestants lose the Favour of the Crowd when:
– Opponents deal a Lethal Blow against them.
– One of their allies is eliminated.
– The contestant takes an action that does not move the match in the general direction of the crowd’s preferred outcome. This can be interpreted very loosely, and is up to the GM.
If a contestant loses the favour of the crowd by suffering a Lethal Blow or having one of their allies eliminated, they can earn it back as normal. However, if they lose the favour of the crowd by deliberately refusing to entertain them, they cannot regain it for the remainder of the match.

The types of contests played differ from arena to arena and event to event, but this list includes some of the most common types.

Dodge the Fist
– Arena Type: This is played in a plain arena.
– Win Conditions: Standard elimination rules apply.
– Favour of the Crowd: Once a turn when a stonefist is hurled at the contestant, they may choose to increase the TN of the Constitution (Stamina) roll to TN16 to gain the favour of the crowd if they succeed.
– Mages standing at the edge of the arena hurl stonefists at the contestants.
– At the beginning of each round, the GM rolls 1d3. This is the number of stonefists hitting the contestants in this round.
– The area the stonefists hit is determined by assigning a number to each contestant. If there are four players, the GM rolls 1d4. The stonefist will strike the corresponding contestant.
– The GM rolls separately for each stonefist.
– If the contestant succeeds at a TN14 Constitution (Stamina) roll, they only take 1d6 penetrating damage and they remain standing.
– If the contestant fails, they take 1d6+5 penetrating damage and are knocked prone.
– The stonefists remain in the arena, turning it into difficult terrain.

Set them on Fire
– Arena Type: This is played in what is commonly known as the fiery cross arena.
– Win Conditions: Contestants must set their opponents on fire to eliminate them.
– Favour of the Crowd: Contestants gain the favour of the crowd when they successfully push an opponent into the flames.
– All four sides of the arena emit two continuous streams of fire to form a cross and four corners.
– Contestants usually start at opposite sides of the arena.
– To set their opponent/s on fire, contestants push them into the flames using the Skirmish stunt.
– When crossing the flames voluntarily, contestants must make a TN14 Dexterity (Acrobatics) test.
– Anyone being pushed into the flames successfully or failing their test when crossing of their own accord suffers 1d6+2 damage.
– Contestants who are taking damage by fire for the third time are set aflame and thus eliminated.

Breath of the Basilisk
– Arena Type: This is played in an arena with vents or a grated pit at the centre.
– Win Conditions: Standard elimination rules apply.
– Favour of the Crowd: Contestants who have the favour of the crowd lose it when failing the Constitution (Stamina) test.
Through the vents or the pit, poisonous gas is pumped into the arena. This is usually an airborne version of the marrow lock poison.
– The gas spreads out 2 yards in each direction every round.
– Anyone caught in the gas must make a TN15 Constitution (Stamina) test every time they want to take a major action. On a success they suffer 1d6 penetrating damage and can carry out their action.
– On a failure they suffer 2d6 penetrating damage and can do nothing but howl in agony.

Cat’s Grace
– Arena Type: This is played in a plain arena with a magical sand whirl at the centre.
– Win Conditions: Standard elimination rules apply. Contestants who are dragged into the tunnels below are also eliminated.
– Favour of the Crowd: Contestants stuck at the centre of the whirl can’t gain the favour of the crowd. If they already have it, they lose it when failing the Strength (Might) test they need to make to get out.
– The sand whirl is drawing contestants 4 yards closer to the centre every turn. They can resist this by making a TN14 Dexterity (Acrobatics) test, which means they are only pulled 2 yards towards the centre.
– Movement speed is halved in the sand whirl.
– A contestant who has been pulled to the centre needs to pass a TN13 Strength (Might) test to be able to leave the centre.
– Anyone who fails two attempts to escape the whirl’s centre is dragged down into the dark and thus eliminated. They find themselves in the tunnels below the arena.

Treasure in the Deep
– Arena Type: This is played in a water arena with three bridges connecting to a platform at the centre.
– Win Conditions: Contestants must acquire an item from the water and take it to the designated exit.
– Favour of the Crowd: Contestants who eliminate an opponent before the item has been found will lose the favour of the crowd if they have it, and will not be able to regain it for the remainder of the Landsbeat.
– Before the teams enter, an item—usually a bracelet or something of similar size—is tossed into the water. The water is 10 yards deep.
– Teams or contestants start opposite of each other on the narrow ends of the arena.
– There are many strategies contestants can use. Some may want to stay on dry land and wait for their opponent to emerge with the item so they can take it from them, others may want to dive down themselves and rush to the exit.
– Only contestants who are in the water may make a Perception (Seeing) test with a TN of 10 + the distance to the item. If successful, they spot where the item is.
– Once the item has been acquired, contestants need to take it to the exit: the third bridge leading to the central platform.

Up for Grabs
– Arena Type: This is played in a plain arena which holds 10 statues in two rows of five at the centre. The statues usually depict local animals or creatures.
– Win Conditions: In three matches, contestants must catch a scalewing lizard before their opponents do. The contestant/team with the best time wins. Should their times be equal, the favour of the crowd decides.
– Favour of the Crowd: Contestants gain the favour of the crowd for successfully getting rid of figments.
– A scalewing lizard is hiding among the statues, and not only is it small and fast, but it is accompanied by one to three figments also depicting scalewing lizards. The number of figments is dependent on the number of mages hired to conjure them.
– Contestants trying to spot a lizard must make a TN13 Perception (Searching) test. If successful, and a lizard is within 10 yards, they get to know its location. If more than one lizard is within range, they get to know all their locations.
– Once a lizard has been sighted, contestants can choose to make a Dexterity (Acrobatics) roll against the lizard’s Dexterity (Acrobatics) to try and grab it, or a TN14 Perception (Seeing) test to figure out whether it’s simply a figment.
– Contestants may make an unarmed attack against figments to get rid of them.