Sargis was born and raised in a small farming village near West Hill. From a young age he was taught that nothing was as satisfying as working hard so you can reap the fruits of your labour. And for a time Sargis even believed it. Until his father took him along on a trip to market in West Hill.

While staying in one of the more affordable inns near the docks he saw a group of people sitting at a table, having the time of their lives and throwing around more money than his family made in a year. His father of course told him to avoid them and that they were ‘unsavoury’ types who are best avoided by decent folk.

That memory stayed with him a long time and many years later he could still hear the merry laughter and clinking of coin. Eventually the monotony of spending farm life become unbearable especially when your dreams are filled with such splendor, so he secretly gathered what he need for the journey back to West Hill and snuck off one night, without a word to anyone.

He reach the city and found his way way to the inn and like before he found several scallywags there. He approached them and expressed his desire to join the crew, they gave the naive several ‘tests’ during the night all which he eagerly attempted much to the amusement of the rogues.

The next morning Sargis awoke with his first hangover ever to find himself curled up on the deck of a ship as the newest crew member of the Juni Moon under Captain Alejandro Musk. Sargis was taught how to use a blade and sail a ship, the lessons were harsh and the work was hard, but Sargis had given up everything to get here and was determined to prove himself.

When it came to his first raid Sargis was at first hesitant, but did not want to his new brothers and sisters to see so he dove in head first. The butcher work became easier as the years passed and the soothing sound of clinking coins helped ease his conscious and the pure joy of victory became something to look forward to.

For several years he got to traveling the world or at least all along the Waking Sea, being beholden to no king or lord, responsible for his own fate and coin flowed like wine. Life was good. Until one fateful day they took a prize and as they often did offered any crew or slaves a place on the Juni Moon and several took up the offer.

One in particular caught Sargis’ eye, a quiet young elf who called herself Conni, he took her under his wing and soon they became quite the couple, but the rest of the crew began to noticed that when they were doing tasked together or during battles Sargis and Conni often coax each other in to performing more and more ostentatious feats often ending with one of them getting injured.

But Conni was satisfied with just being a crew member she had higher ambitions, but due to her reckless behaviour the crew was reluctant to vote her into any positions of real authority. what happened next is a issue of some debate since Sargis refuses to speak of it and denies any knowledge of the events.

But the rumours in dockside taverns where raiders often gather to share ale and tales tell of a bloody mutiny aboard the Juni Moon that ended with half the crew dead and Conni as captain. Ever since Sargis had kept himself land bound doing what mercenary work he could find, rarely speaking of his days at sea.

After agree to a simple task of retrieving a hammer for an anxious blacksmith for an exorbitant sum Sargis finds himself once more part of crew and despite them being a bit odd and having vastly different personalities he is comfortable and content. 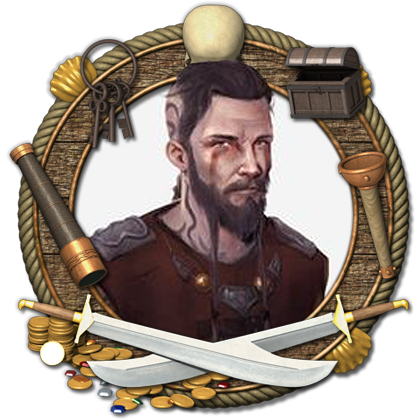