An Imperial soldier with a magic touch

Rhea is slight of stature with dark brown eyes and medium brown hair, which is pulled away from her face in a ponytail. There is a prominent beauty mark beneath her right eye.

She favors capes after the Imperial fashion, as well as purple, brown, and gold attire.

At sixteen, eager to strike out on her own, Rhea undertook a campaign with a crew of pirates on the Waking Sea, where she met Sargis. Shortly afterwards, she signed a five year contract with the Imperial Militia. She trained in Estwatch, then was later shipped off to serve in Denerim. There, she met her friend Viatrix “Trix” Faustus.

For the last two years, Rhea has been stationed at Wutherford, with the Wutherford 1st Century but was left behind when the majority of her century were pulled back to the Imperium. Though she originally planned to reenlist, Rhea’s faith in the Imperial military has been shaken by recent events. She and Faustus joined the Heartbreaker Gang instead. She is closest to Revas, whom she considers a dear friend.

Braedon asked to court her when she first came to Raven’s Roost. The two have grown closer, sharing quarters, traveling together, and finally marrying. They have a child, Liam, conceived under unusual circumstances. 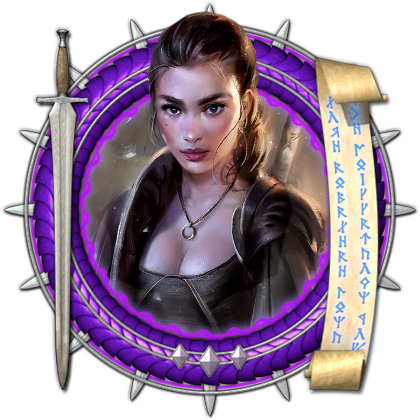