There And Back Again 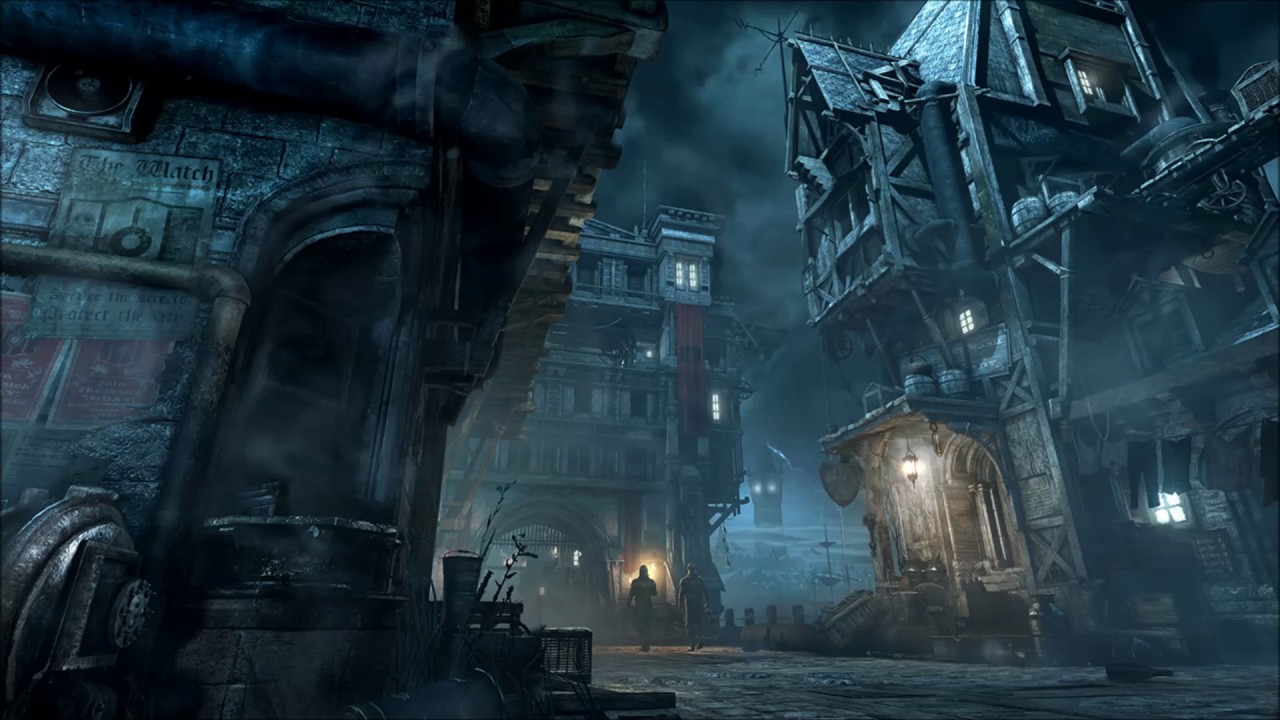 The sight of Denerim weighs heavily on the members of the Heartbreaker Gang as they start their search for Ardis. The wait to get there in the first place nearly drives Revas into a state of despair, so the talks of searching Leonara’s room and Cato’s as well put him even further on edge. They have a rough plan for finding Ardis here in the Tevinter occupied city, but that doesn’t mean that the group are all fully focused on one singular goal. The opportunity is just too much to overlook when it comes to dealing a blow to the Liberatori and their foothold here in Ferelden.

Despite the urgency of their quest, however, that doesn’t mean that a few members of the gang would pass up the opportunity to have a look around Leonara’s abandoned room and perhaps gather a few things of interest before starting things off in their potentially exhaustive search. Rhea finds a few magic books, pocketing them before skimming a hand over the labels of alcohol still kept safe in their crystalline containers. Valeria meanwhile quickly looks over the books in the bookshelves, scribbling down the names of the more well loved books on a small piece of paper and a pen she managed to find on the desk before it was rummaged through. Some of the titles she can read, but some leave her confused as she struggles to write down an unknown script as best she can.

Footsteps begin thudding down the corridor, catching the attention of the ever perceptive Revas as he stands near the door. The sound of someone or something being dragged is heard as it leaves the space by the door, but the more pressing situation is the sound of someone stopping and sniffing the air.

Fear of being ambushed and wanting another way out runs through the minds of the Heartbreaker Gang, so Rhea attempts an interesting application of her magic. Using her decomposing magic, she starts to slowly rot away the wood in the wall. But upon seeing that the amount of surface area wouldn’t be rotted fast enough to make a quick escape, the effort is left for now.

Not wanting to wait any longer, Valeria charges into the hallway and finds several draaks and mages between the gang and the exit to the mansion. A battle breaks out, several mages running off while attacking around corners and dodging into rooms when they can. The gang manages to persevere and heads into Cato’s room for a quick check. They grab everything they can find of value, keeping an eye out for any books and journals, when a plan comes to mind that’s too tempting to pass up. They dump a couple of books on the floor and rip some curtains down, and when all that is done, a fire is set to burn the mansion down to the ground. When they rush down the stairs, they are confronted by a couple of mages, who are either dispatched or left behind as the group leaves the rapidly igniting building.

The group marches forward, knowing that every minute is one minute too long. But even so, they are going so far as to sneak through alleyways of Denerim, the patrols on the street none the wiser of their trespass. The moment they step into the tower however, things don’t go as cleanly and without bloodshed.

They make their way through the tower, taking on guards and mages left and right as they search for the floor Ardis might be on, burning and taking what they can as they move. Two prisoners are freed, released but unconscious as the Heartbreaker Gang hurries at the behest of Revas and a growing sense of dread between them all. But upon finding Ardis, everything starts to take a darker turn. His body lays cold on the ground, and it freezes the hearts of the gang as they take in the scene.

Red magic symbols cover the floor of the room, Ardis’ body in one spot while black dragon eggs sit in other circles nearby. An electric current flows between the egg and the body, and it flickers as it interacts with another body in a metal cage. Its black, draconic body is recognizable, even from where they stand. Revas falls to his knees near the body of his partner in shock. Sargis and Rhea look about the room, trying to find a way to help with the situation at hand and perhaps reverse the process, but Valeria is the first one to act. Cutting herself carefully, she looks to the red symbols and the magic that she has come across before and does all she can think to do to help the weakening flickers of electricity.

Valeria feeds the spell, aiding the magic ritual she has come to fear from interactions with similar dark work. In her efforts, the body in the cage eventually begins to breathe more evenly and twitches to life as the spell starts to take effect. And as it finishes, draak eyes open and look upon Revas in confusion, pain, and fear. It is Ardis that looks back at Revas. Ardis feels the weight of his own form and sees his previous body laying on the cold stone floor. But Revas moves forward, opening the cage and greeting Ardis as the two of them speak and try to figure out what is happening. It takes some convincing, some words of comfort spoken between the two of them, before the group moves forward with more haste. Even as tears travel down Revas’ cheeks at what has been done to Ardis, the two move together with love in mind as the Heartbreaker Gang start their retreat.

Revas and Ardis, in need of a quick escape, take the other members of the Heartbreaker Gang at their word that they would join them soon, and crush their own orbs that Leonara provided to teleport them back to safety. Meanwhile Rhea, Valeria, and Sargis’ work is still not quite over. The three of them quickly take to the stairs again, leading up further into the tower to try and sow a little more chaos in this Liberatori base.

The next floor up, standing there with more corpses under his command, is Sathurian. He looks surprised to say the least, as the trio show up before him. Even more so as Valeria and Sargis leave him to Rhea as they surge towards the top of the tower and their secondary goal for coming here. While they rush up the stairs, Rhea calls out that she will be back home in three minutes. Meanwhile, buying time for the others, she takes out a few enraged corpses, their puppeted bodies unable to handle the power of the Sword of Sareth. This definitely catches Sathurian’s attention as he turns to defend himself from her attacks as the tower and his heart begin to burn.

To the top of the tower with haste, Valeria and Sargis rush to find themselves face to face with several draak guards lying in wait. They attack with fire, with fang, with claws, and leave the duo with burns, but still with intent in their hearts. While Sargis deals with the draak while staying behind his shield, Valeria focuses on breaking the crystal with brute strength and a few well placed strikes. Even as the two are attacked, bleeding from the attacks and fending off two draak each, they break the crystal and hear the silence fill Denerim. Silence, empty and lifeless, takes over the streets of Denerim until chaos breaks out as the controlled forces of the Liberatori break out into fights between one another.

Taking that as a hint that it’s time to leave, Valeria grabs a piece of the crystal and turns around just in time to see Sargis hop on the ledge and jump off the tower. With the dramatic flair he’s come to be known for, Sargis waits for a moment before crushing the orb he has and teleports before he becomes a smear on the flagstones. Valeria meanwhile marvels at the dwarven craftsmanship of Borin Runeforge, wondering at Ashrune’s capability of breaking a crystal while keeping its edge. But soon enough the remaining draak turn their wavering attention to Valeria, so she too vanishes after crushing her own orb.

Rhea, Valeria, and Sargis soon find themselves back near Wutherford with grass beneath their boots and trees casting shade upon their backs. Revas and Ardis stand awkwardly with Leonara who eyes the situation warily even as the others show up. There’s a moment to breathe, to take in fresh air not clogged with smoke and blood, but the reality of the situation and the quick decisions made in the moment now start to hit the gang as they take a moment to collect themselves.

When the world seems dark, the Heartbreaker Gang make their move to bring light back to the places around them and to the people they care about. But what is there to be done when irrevocable change and hasty decisions might one day come back to bite them? Will Ardis be able to cope with his new form? Will the results of the blood magic ritual have further effects on Ardis and Valeria? Will the Liberatori lose control of Denerim as the freed draak and darkspawn tear each other apart? Thoughts for another moment perhaps after they enjoy a few seconds of peace. For who knows what might be waiting for them as they take their first steps towards home again with new allies and old ones forever changed by the Heartbreaker Gang’s actions.

Episode #116 Looking For: Support Group For Newborn Draaks And Their Partners

Episode #115 They landed. It's a short sentence, but contained a lot of incident.

Episode #113 Until We Meet Again