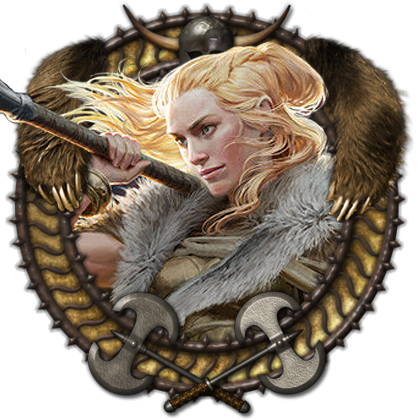 In the late evening hours, when the light begins to descend and shines over the rimed ground of Eagle Eye Hold, the Amell family spends some quality time together peacefully. While the other members of the Heartbreaker gang go about their business, Valeria and Drynne spend time training Senga the wolfhound a new command. Drynne puts in a lot of effort, happy and willing to learn if it means his future chances at getting a war hound of his own are increasing. And knowing this, as she watches Senga trot over to Drynne after he calls to her, Valeria smiles wistfully as she starts to recognize the signs that things won’t stay the same.

Light cascades across the room from the fire nearby, filling the room with warmth as Arna and little Erik sit at the table and talk with one another. The soft murmurs of their two voices, sleepy and calm, leave Valeria feeling more sentimental than usual. Drynne’s request cuts through the evening air, and it makes Valeria furrow her brow slightly as she refocuses.

Being a parent would never be simple, but Drynne doesn’t make it easy as the boy grows up in leaps and bounds. His request is simple, not something out of the ordinary for someone his age, but even Arna doesn’t seem too sure about it as the word tattoo is brought up. The discussion is brief, and Valeria caves as she sees the hopeful look on Drynne’s face, before she agrees to his request and goes to talk to Galinn about it tomorrow. Drynne quickly heads off to get ready for the outing the next day, a bounce in his step. Meanwhile Arna and Val relax at the table and reminisce about where they started and how much the boy has grown since they first met him. Talk turns to travel, to the things they need to do, and the long way home, but the evening slowly comes to an end as the family prepares for bed after another long day.

The morning reveals a sleepy Morrighan’nan who greets Valeria and Drynne before listening to her daughter’s apologies early in the morning. Her behavior after the fight wasn’t the best, a feeling of being inadequate taking over after losing yet another fight to an opponent in a sparring match. Seeing her daughter’s expression and feeling of still being less than, Morrighan’nan suggests taking on other opponents that might be more appropriate until Valeria has managed to get better and have more confidence in her combative expertise. Thora is mentioned, and after a few jokes about her and Valeria’s comment about being loyal but not being blind when it came to seeing another good looking woman within Eagle Eye Hold, Valeria agrees to have a sparring match with the warrior. With some sibling to sibling looks and threats about not letting word of this leave the room, Valeria, Drynne, Björn, and Morrighan’nan head off to the arena to see how the fight will go.

Greeting Thora in the arena, the light snow covering the arena only disturbed where Thora was training in, Valeria challenges her to a sparring match. Though Thora is well trained, experienced, and quick, things don’t go so well for Thora. Valeria’s heavy blows from fighting those in stronger armor, and from wielding such a large weapon for most of her career, give her the advantage she needs to drive Thora back and knock her to the ground. With a final strike at the ground beside Thora’s head, the match is over. While Thora’s win streak is now marked, Valeria takes the win graciously and listens to Thora’s suggestion of fighting Gunnar.

Taking all this in stride, Valeria heads back to Morrighan’nan and the boys, seeing the pride in Morrighan’nan’s expression before messing up Drynne’s hair playfully. The two women exchange stories, drinking in the Leaping Elk after all is said and done as they mention how fast kids grow up and round out their evening companionably.

After arriving back at the Longhouse, and Drynne’s new tattoo being shown to everyone around with pride, Valeria goes to talk with Flemeth in her room. Flemeth warns Valeria about fighting in the Landsmeet, despite the strong hints of wanting to do so when it came to Conobar and Luthias. To try and help in her own way, Flemeth tells Valeria about how Conobar is more likely to simmer about the issue regarding the war with the avvar, while Luthias is more the kind to get loud about the topic if mentioned.

Hearing Flemeth talk about Conobar, questions come to mind as Valeria attempts to prepare for her first meeting with him. If things were going to work between the two sisters and for the future ventures for Valeria and the Heartbreaker gang, information needed to be gathered about what all Conobar has done and how he is as a person. While Conobar is not a cautious man when he’s angry, his skill in naval combat and on the field of battle himself is not something to ignore. He’s a capable leader and combatant, and there will be a gap left behind should he lose his position. The Guardian’s Captain Dimitru of Highever is the one mentioned to take Conobar’s place should something happen, but it leaves many questions about Conobar’s lack of planning for such an event. What will be even harder to find is evidence, and even with the hint that such things could be found if one talks to the right people in Highever…things are looking a lot more difficult in gaining information about such an important political figure in Ferelden.

Flemeth also speaks abotu Conobar’s prowess in battle. In fact, the man is skilled in more than just being a noble. His skill at naval combat is worthy of note, the same with his prowess with longsword, shield, and/or a two-handed spear. Though he tends to not be cautious when angry, the evidence of wrongdoing is more likely to be found in Highever than anywhere else. Perhaps this Captain Dimitru will be able to provide the answers as the one to take over command of the city should anything happen to Conobar himself. And with Sargis’ connections with the Guardians, it might be easier to talk with him first.

Flemeth and Valeria keep up their conversation for awhile, Valeria voicing aloud her plans to make friends with Arlessa Teagan and Sheridan to try and make some moves within the political sphere as well as aid in the battles to come. And while the Liberatori are a threat, Flemeth seems knowledgeable about them to quite a degree but once again keeps her words to herself, as is her way. But she does speak her mind on having her own plans when it comes to Conobar. And that should the day come that Valeria declares war on Conobar, Flemeth says that she too might join in the fight so as to get revenge for Valeria’s sister and also to mete out punishment for the man that caused so much harm.

As the day of departure continues to get closer and closer, Valeria spends her time crafting and spending time with her family. The time is spent making a wooden figure, and going off to buy a new riding goat that she lovingly names Stig. When time passes and laughter and soft words pass between Valeria and her family, the day to leave is soon to arrive and all she can do is bask in the warm glow of it all and hope that things go by smoothly as they leave this place and head back into the dark political mess of the world beyond…

Episode #108 Highever, The City Of Commerce